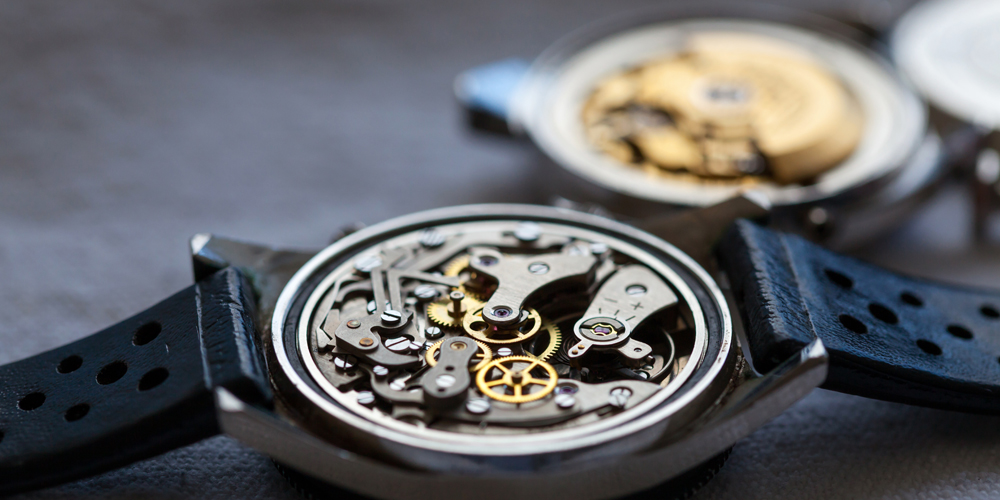 Quartz or automatic, which is best? How do you choose? The quartz vs. automatic debate is a topic that will always divide the crowds. There’ll never be a time where one completely triumphs over the other, and that’s because both are manufactured to such high standards these days. High-end quartz movements have so much to offer in terms of functionality and reliability. On the other hand, mechanical watches require a slower process to make and are conceived through a more traditional approach to timekeeping.

The history of mechanical watchmaking

It was the 1500’s when German craftsmen developed the first watch to be worn around the neck. It would be another century before pocket watches became used and valued for timekeeping as opposed to a product of specialist taste. During the 17th and 18th Centuries, Britain paved the way in horological development, popularising the use of pocket watches amongst the upper class of society before the Swiss industry took over. Abraham-Louis Breguet was credited with creating the first-ever mechanical wristwatch.

Then everything changed. Pilots and professional aviators began utilizing the wristwatch for keeping precise, enjoying them as a practical alternative to a hand-held pocket watch. During the First World War, soldiers took advantage of a wristwatch to assist with the timing of crucial, life, or death situations. The Swiss watch industry dominated the market with timepieces of exceptional quality and superior craftsmanship until the Quartz Crisis.

The history of quartz watchmaking

Ushering in a new generation of watchmaking, the 1960s saw a technical breakthrough that almost wiped out the Swiss watch industry in one fell swoop. Japanese-made quartz calibers were created by the watch brand, Seiko, and offered a much higher level of precise timekeeping than automatic watches. The popularity of quartz watches took the world by storm, and the Swiss watch market came crashing down.

Many manufacturers had to sell their mechanical components and watch parts to third parties or suffer complete collapse. The threat posed to the Swiss watch industry was dubbed the Quartz Crisis. Some companies adapted to the change by manufacturing their own quartz watches, but others perished and never resurfaced even after the crises was over.

The first mass-produced quartz watch was the Seiko Astron, but it didn’t come cheap. At the beginning of the quartz movement revelation, the more accurate the watch, the more you paid. The Astron became the first mass-produced model before quartz watches were made more readily available and affordable. Following in the footsteps of the popular quartz movement, the likes of IWC, Omega and Rolex wanted in on the success. They are prime examples of high-end Swiss watch manufacturers that evolved with this industrial change, creating the Da Vinci, Electroquartz, and Oysterquartz, respectively.

There are some misconceptions about the quartz movement. Some see it as inferior to a mechanical movement, despite being more accurate. Maybe part of this is down to the fact that quartz watches are cheaper since they’re quicker and easier to make nowadays. The debate between quartz vs. automatic remains a matter of personal taste. It’s worth examining the benefits of both the quartz watch and the mechanical watch to decide which option is better.

The argument for the quartz movement

Today, 90% of the world’s watches are made from quartz movements. They are mass-produced on a generally more budget-friendly scale. However, you can still pay well into the thousands for an expertly crafted high-end quartz watch. To put in simple terms: a quartz watch is reliable, durable, and cheap to make yet super accurate. But how does a quartz movement work? Well, the battery inside the quartz watch vibrates a tiny quartz crystal around 33 times per second!

It also performs at an almost perfectly consistent frequency, enabling the watch to measure time accurately. These vibrations are then converted into impulses to drive an electronic motor. This is essentially the engine of the entire timepiece. It’s what people often refer to as the “beating heart” of a wristwatch. This electronic motor moves the hands around the dial.

There are very few moving parts to a quartz movement that can go wrong. Hence, quartz watches are considered generally low maintenance. You have to replace the battery over time, but you certainly don’t need to service your watch regularly to ensure it performs flawlessly. If you want a low-maintenance but accurate watch for wearing every day of the week, a watch powered by a quartz movement may be the best option.

For the same reason that quartz watches require little care and maintenance, the few components that make up a quartz movement allow for a generally slimmer case depth. If you like your watch to sit snug on the wrist, it’s probably another good reason to invest in a quartz watch. That said, various Swiss brands have perfected the art of creating ultra-slim mechanical movements over the years, so it’s worth knowing that owning a slim watch doesn’t necessarily confine you to the realms of quartz watches alone.

A quartz watch can also offer you the option of a digital display instead of a traditional dial. Smartwatches are a great option for those who like their gadgets. TAG Heuer, Fossil, and Frederique Constant are just some examples of watchmakers who have created Smartwatches powered by a quartz movement. These enable you to control message and call alerts while enjoying functions that enable you to track your heart rate, calories burnt, pulse rate, sleeping patterns, and steps walked through the watch’s fitness tracker. This is all the while connected to your iPhone or Android device.

The bottom line is that a quartz movement will promise you better accuracy than even the most sophisticated mechanical wristwatch. The debate for many a watch connoisseur is whether you want a watch that has been uniquely hand-crafted the traditional way or want a no-hassle watch that you can forget about until the battery needs replacing.

The argument for the mechanical movement

A mechanical wristwatch may be more expensive to manufacture, reflecting a higher price tag. They may also be less accurate than a quartz watch, but the argument for the mechanical wristwatch is that they have heaps of character and soul. Several prestigious watchmakers are still creating mechanical timepieces in the Swiss Jura location, where the history of Haute Horlogerie originated. Some of the most intricate watches in the world are mechanical. Top watchmakers include the likes of Audemars Piguet, Patek Philippe and Vacheron Constantin who belong to the “Holy Trinity” of Swiss watchmaking.

How do these watches work, though? Mechanical watches are powered by the release of energy from a wound spring. The spring turns the gears and regulates the mechanism, which, in turn, powers the hands around the dial. The complexity behind a meticulously crafted mechanical wristwatch is often what interests a collector.

Whether you’re hand-winding the watch yourself or whether it relies on the movement of your wrist to automatically produce the power for accurate timekeeping, a mechanical watch is so much more than an instrument to track the passing minutes of the day with.

Automatic watches are powered by the movement of your wrist and use Kinetic energy. These beautifully crafted timepieces often showcase the movement’s performance through the back of the case, with all components working harmoniously together. The complicated system of jewels, gears, pins, wheels, teeth, and springs is a result of labor-intensive and painstaking skill that is a true work of art in itself. Put simply – serious collectors go wild for self-winding and hand-winding watches.

There are so many aspects to be enjoyed about an automatic watch. There’s the fascinating engineering work to admire, the history of the brand’s watchmaking know-how to commend, and, of course, the unique and individual enjoyment in owning a wristwatch that has been crafted, designed, and developed by the hands of some of the world’s most talented craftsmen. The technology behind a mechanical wristwatch, be that automatic or hand-wound, is hundreds of years old, reflecting in its more expensive price tag.

A properly maintained automatic watch that has received regular servicing will work at its best. To some, taking good care of their wristwatch is just as enjoyable as wearing it. Pre-owned watches can be just as sought-after and as expensive (if not more expensive) than a brand-new watch, depending on how many years it remained in production for and whether its vintage style is deemed desirable.

The Patek Philippe Nautilus and the Rolex Submariner, for example, are steel sports watches that still cost more on the second-hand market than some brand new watches made from precious metal do. There’s also the added benefit that an investment piece can be handed down the family line from one generation to another. It’s an heirloom that can be worn and used as well as cherished.

Which is better for me: quartz or automatic?

To decide whether a quartz watch or an automatic watch is the right choice for you, it’s a good idea to consider what’s most important to you in a watch. There’s no right or wrong answer here. As mentioned before, the quartz vs. automatic debate is entirely down to personal choice and preference.

Do you prefer the idea of a relatively easy, low-maintenance watch that you don’t have to spend any money on or any time thinking about? Is uncompromised accuracy crucial to your line of work or lifestyle? Are you looking to purchase a watch on a budget? Or maybe you like to change your watch every few years, so an affordable timepiece is the best option to enable you to replenish your savings quicker in preparation for your next one? If so – quartz watches are for you. You can choose a watch with as many or as few features as you like for a fraction of the price of a mechanical wristwatch.

Brand names like Casio, Seiko, and Citizen are renowned for the expertise in the field of quartz-powered gadget-friendly wristwatches. Or opt for a high-end quartz watch from Breitling, Longines, or TAG Heuer if you want a timepiece that combines unbeatable precision with the high-end feel associated with a recognizable brand name.

Do you like the idea of an intricately crafted timepiece that tells a story about the hands that have crafted it? Do you like to research where a product comes from before you invest in it? Are a brand’s philosophy and ethos important to you when you invest in a product? If “yes” is the answer to these questions, then your best option is a mechanical wristwatch.

If the ins and outs of how something works interests you most about a watch, opt for a design that puts the beating heart of the watch on show. This is either through the back of the watch or through a skeletonized dial.

The bottom line? A quartz watch appeals to common sense and functionality, and a mechanical watch appeals to our hearts. Each deserves a place in any watch collection. What kind of watch enthusiast are you? 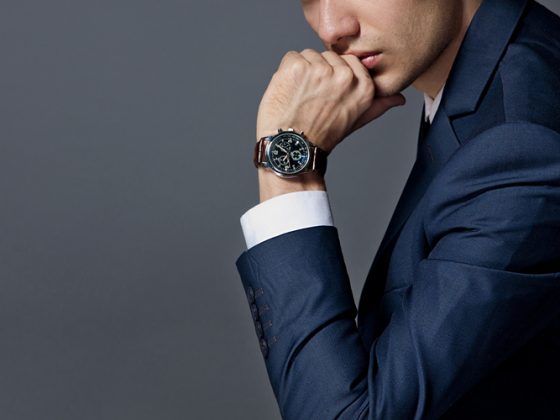 Top 5 Watches to Wear with a Suit 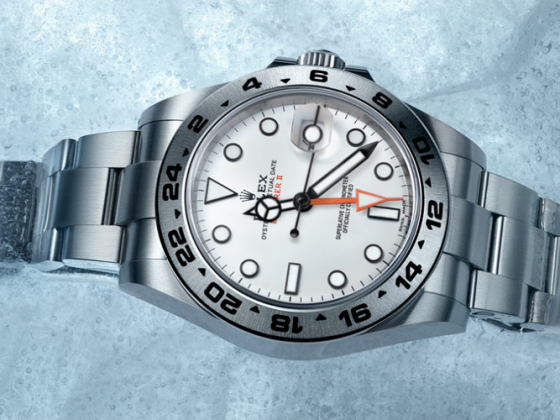