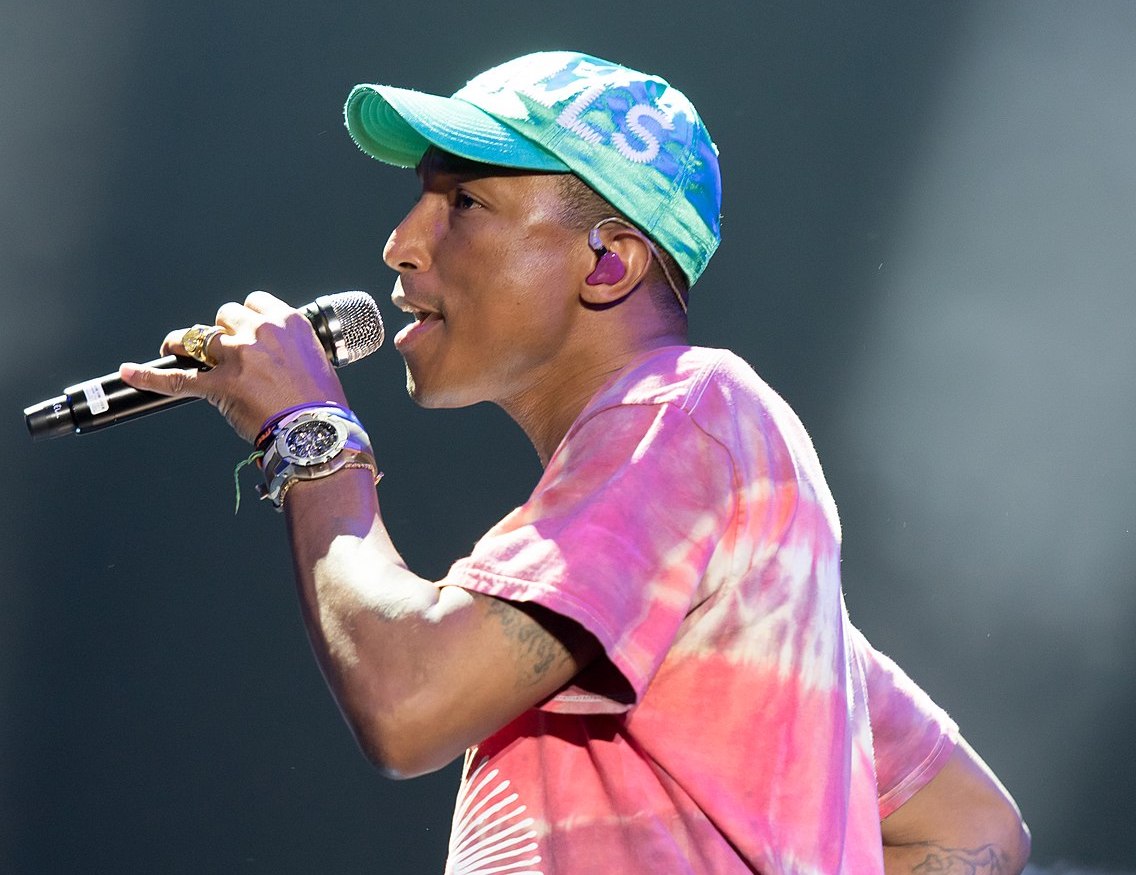 Pharrell Williams is most well-known for his ability to top the charts with his music production, but he also has another hobby that turns heads. His watch collection is described as breathtaking, technologically impressive, and completely unique. From a watchmaker’s standpoint, Pharrell Williams has some of the best taste and understanding of the intricacies required to craft and maintain such beautiful timepieces.

His connection to Richard Mille watches has led Pharrell to own several of the company’s best products, four of which you’ll see in this article. While most people simply purchase based on the appearance, the famous singer and songwriter get involved in the creation process to see how these unbelievable works of art are made. To see which watches he’s chosen and how precise every last piece is, read on! 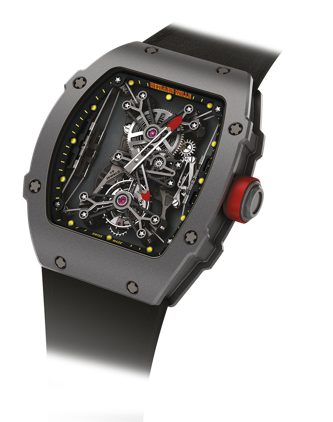 The Richard Mille 27-01 Tourbillon Rafael Nadal is a state-of-the-art watch that quite literally breaks records. The concept of this timepiece was founded on the idea of creating a lightweight, tough watch without expanding the display size. After countless hours of their engineers coming up with new ideas through trial and error, Richard Mille created Rafael Nadal that we know and love today.

Weighing in at only 18.83 grams, this watch blows the competition out of the water. Most other competitors with the same goal in mind are five to ten grams over, giving Richard Mille a seemingly unbeatable record. Even the strap is ultralightweight, which usually bogs down other watch brands and models.

Through consistent application and an unwavering vision, the RM 27-01 watch was created. It has four solid cables that hold a baseplate against the outer case, each of which is only 0.35mm in diameter. This fine attention to detail is just scratching the surface of the complicated design process.

With only 50 pieces created, this limited edition watch by Richard Mille is an astounding addition to Pharrell Williams’ watch collection. Although it’s lightweight, the watch is made to withstand heavy force and quick movements, which is an obvious necessity for performers who move about the stage frequently.

Accelerations of 5,000 grams are tolerated, even though the watch weighs nearly 1,000 times less. Paired with a tourbillon movement to control the minutes and hours on this watch, you might not find something so versatile anywhere else. 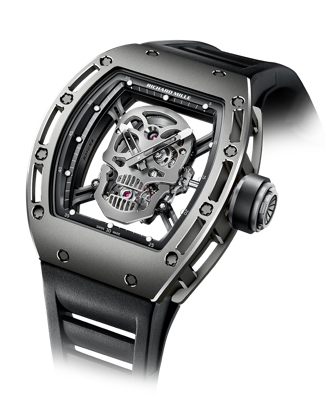 Another one of the incredible watches in Pharrell’s collection is the RM 052 Tourbillon Skull. This watch represents the various symbolic references to the human skull, of which hundreds of cultures have different meanings. To both appreciate and describe the influences of the watch, Richard Mille centered a human skull as the main piece that holds everything together. This is not only very useful, but it’s a nudge to the importance of the skull in a literal and cultural sense.
Made out of grade 5 titanium, this skull is a solid point to base their watch.

The ruby tourbillon cage that helps tick the timepiece is centered within the jaws of the skull. With a center bridge that’s crafted out of the back of the skull, every piece of this watch has a unique function to pair well with the appearance. In total, four bridges that are representative of crossbones connect the movement to the case for a seemingly indestructible design.

Tiny holes throughout the case and bezel of this watch are created for two primary purposes. The first purpose is to reduce the overall weight of the timepiece. This is also helpful for quick movements when playing golf, tennis, or running for exercise. The second purpose of the openings around the watch is to go with the skull concept that holds the attention between the broad arrows.

This limited-edition watch is definitely one of the most stylish and symbolic watches in all of Pharrell Williams’ collection. It’s no surprise that he was drawn to the skull, given his other jewelry choices that represent ancient cultures, bones, and ankhs. Upon initially inspecting the watch, you might think that it appears as a simple skull. However, thorough analyzing reveals the complex inner workings that make this unique watch tick. 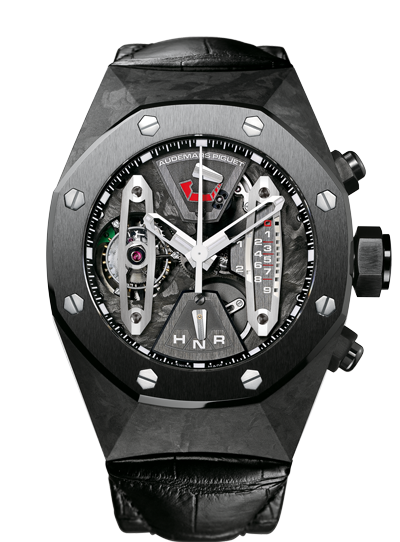 The Royal Oak Concept Carbon Watch is the essence of complexity and detailed beauty that countless watchmakers have sought to create. It’s a watch that requires a second look to really understand each and every piece put into the hand-wound tourbillon. Pharrell is often seen wearing this as one of the only non-Richard Mille watches in his entire collection. They’re so limited that they aren’t even produced anymore.

Over 30 jewels can be found throughout this watch. They’re protected by titanium on the back that refuses to rust or corrode, even when submerged in water. Speaking of water, this watch has a resistance rating that goes all the way down to 100 meters, or about 330 feet. In total, 388 parts are put together in this incredible timepiece by Audemars Piguet. That statistic alone makes it one of the most complex watches in the world!

The 44mm display makes it easy for the artistic dial to be seen. There’s also a titanium folding clasp that doubles-up on the integrity and longevity of it. It has a power reserve of 237 hours, which is displayed alongside the time, selection indicator, hours, minutes, and seconds on the watch’s face. All in all, this titanium beast of a watch is the epitome of complexity and delicate art put into a watch that’ll never be replicated, at least not any time soon. 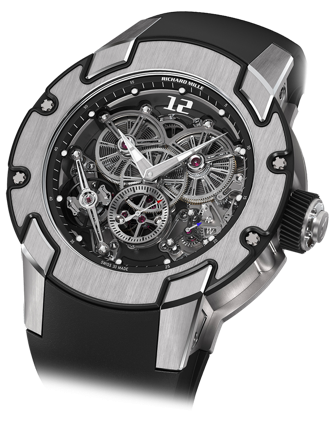 Watchmaking and timekeeping have been relevant for countless years, but precise accuracy has always been an issue, that is until now. The RM 031 High-Performance Calibre Watch took the world by storm by creating perhaps the most accurate watch ever. The various is down to a mere 30 seconds of deviation per month, which far overshadows the tradition deviation of 150 to 200+ seconds per month. Richard Mille set out to create an extremely precise watch designed for high performance and they definitely delivered.

Perhaps the most appealing feature aside from the aforementioned accuracy of this watch is the simplistic design that mimics old-age watches. It’s crafted with the idea of modern art and entertainment, but the homage paid to traditional timekeeping is a visible nod. Classic appeal matched with present-based precision and functionality has made the RM 031 a nearly unbeatable watch on a tier of its own.

26 jewels set throughout the white gold used in this watch create a subtle glamorous aspect that’s undoubtedly noticeable. The double balance spring ensures reliable performance, as do the angled titanium teeth of each gear. Such an angle adds to the precision as one of the numerous pieces whose sole function is to provide seconds, minutes, and hours visible from the front dials. The face also shows the power reserve indicator that stretches to 50+ hours.

Although the accuracy of the time is the obvious frontrunner of importance for Richard Mille in this watch, toughness was a close second. Being able to see all of the individual moving parts is something that most watchmakers can’t conquer due to overlaps in the structure.

Richard Mille, on the other hand, has shown just how durable the grade 5 titanium makes this watch look and feel through visual representation in every square millimeter across the stunning timepiece. 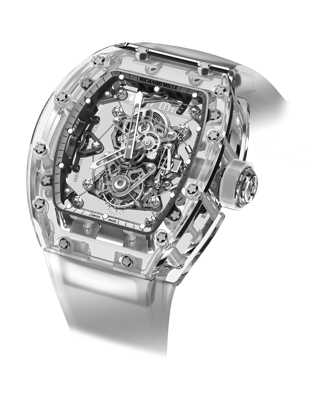 Last but certainly not least in the impressive watch collection of Pharrell Williams is the beautiful RM 56-02 Tourbillon Sapphire Unique Edition Watch. This watch lets the viewer or wearer dive right into the creation process by showing every last detail that makes it work so clean and precise as it does. It uses similar hints that the Raphael Nadal watch has, but with a unique twist to make it its own classy bracelet.

The first feature that’s virtually impossible to not notice is the transparency. Wearing this watch feels as if you’re watching it being created for the first time. Appreciating the hard work and dedication that went into it is only half of the impressive nature of the RM 56-02, though. Much like most other Richard Mille watches, grade 5 titanium is used to hold this entire contraption together. It protects the timepiece while the sapphire does the flashy work.

Solid blocks of pure sapphire were used throughout this watch, which is one of the main reasons that it’s so limited. Richard Mille made it so the band wraps naturally around the curvature of a wrist, making it the most ergonomic high-quality watch in the world. With only 10 pieces ever made, it’s safe to say that those who own this can truly soak in the breathtaking aspects of each and every part, along with the countless hours that went into making these watches.

The Timeless Collection of Pharrell Williams

Pharrell Williams is a style icon for many, praising companies that dedicate hard work and stunning art into everything that they produce. It’s no secret that this man understands the truth behind the quality, as his music and songwriting skills represent clearly. Paired with his wardrobe, these five watches are some of the most impressive timepieces, not just in his own collection, but in the entire world.

Limited-edition watches with anywhere from 30 to as low as only 10 made across the globe makes him a truly unique watch collector unlike any other. Whether it’s the RM 052 Tourbillon Skull’s symbolic references or the RM 056-02’s 1,000-hour creation process, these watches are as exclusive and classy as it gets. 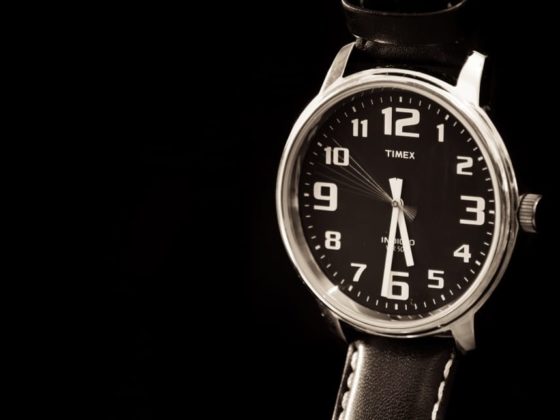 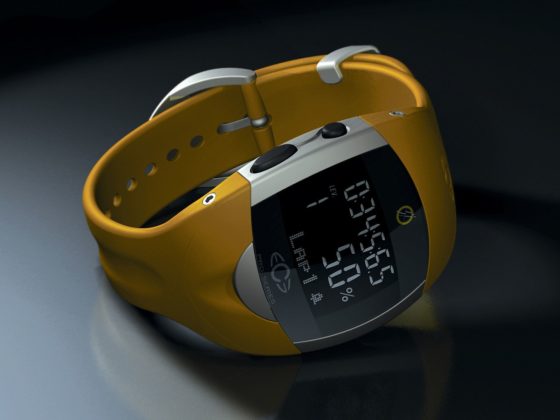 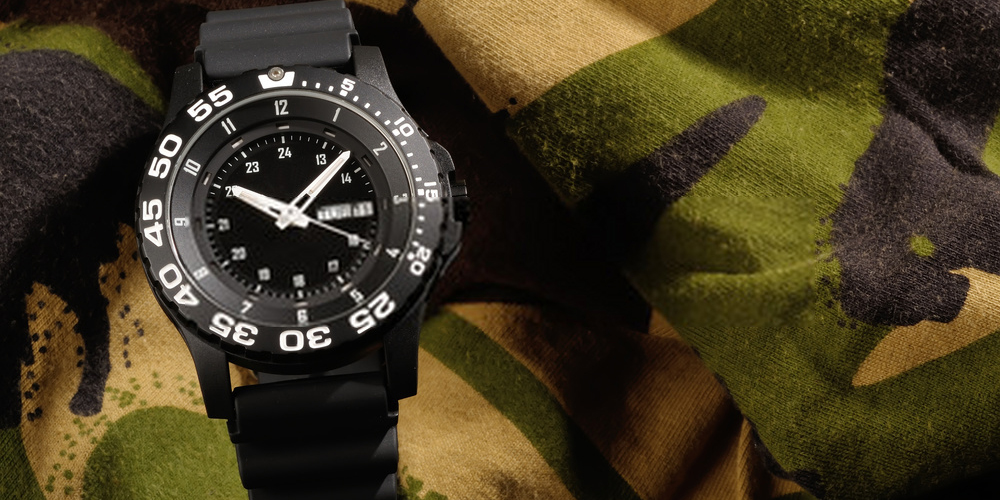