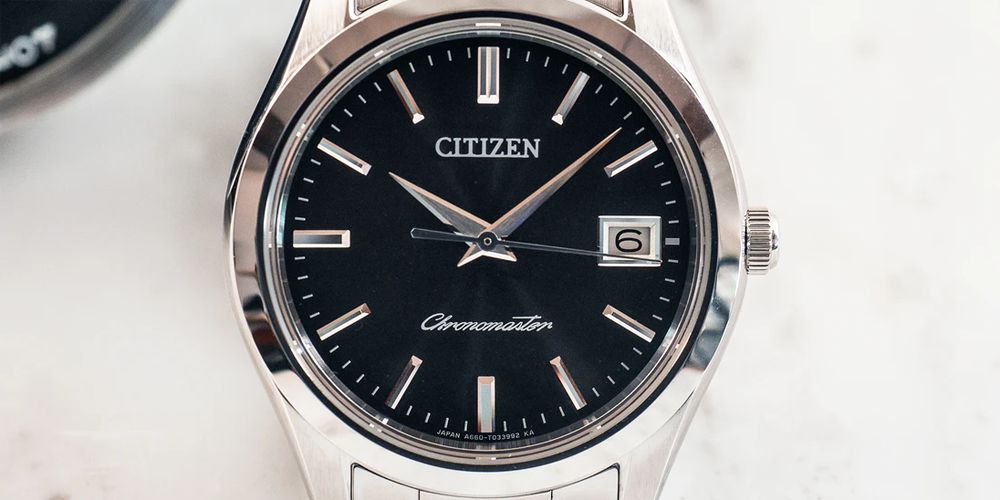 It has been said many times before that a mechanical wristwatch is superior to a quartz watch. But is that exactly true? We all know that quartz watches are more accurate than automatic watches. The topic divides people’s opinions even to this day, centuries after the first self-winding watch was developed.

When the first quartz watch was created, it had an extortionate price tag because the more accurate a wristwatch was, the more you paid. In fact, it wasn’t until the quartz crisis was over that people reverted to the beauty and authenticity of a mechanical wristwatch once again, regardless of whether they promised the same accuracy or not.

Brands like Citizen and Seiko remain at the forefront of cutting-edge quartz technology. Not only that, but both companies are renowned for their expertise in the field of GPS and radio-controlled wristwatches. But today, we’re going to explore the unique attributes of the Citizen Chronomaster B900-61E model and look at what makes it such a beautiful timepiece. Now, let’s not mistake this for a solar-powered watch, although there is a solar-powered version of the watch available on the market. This is an independently operating quartz movement that offers exceptional precision for its price point.

The advantages of a quartz watch

Quartz watches are more often than not all thrown into one bag. They’re mistaken for all performing the same. But those with in-depth knowledge of quartz-powered movements know better than that. Just like anything in the world, there are varying degrees of quality to be considered between one quartz-operated watch and another.

That’s why High Accuracy Quartz (HAQ) watches are recognized as technically more sophisticated than any standard $10 quartz watch. Watches like the Pulsar PSR-10 and PSR-20 prove this point, with an accuracy of 10 and 20 seconds per year! Higher-end watches from Breitling and Longines like the Superquartz (a movement that is 10 x more accurate than a standard quartz movement) and the VHP (with exceptionally long battery life), respectively, break the norm.

These superior quartz watches are worthy of serious consideration when buying a watch.
Aside from the obvious advantages of a quartz watch vs. a mechanical watch, like their hassle-free, wear-anywhere type of design, quartz watches also require no manual winding and don’t rely on the motion of your wrist to keep the movement humming away inside.

You also won’t need to regularly service a watch such as the Citizen Chronomaster B900-61E like you would do an automatic watch. The online watch community recognizes expert manufacturers in “High Accuracy Quartz” (HAQ) watches as those such as Seiko, Bulova, Breitling, and Citizen. The latter is a leading pioneer in both solar-powered watches, radio-controlled watches, and GPS watches.

Still, there are pros to a quartz watch over a Citizen GPS watch that are worth noting. While GPS watches deliver accuracy, they don’t generate it themselves. Moreover, a GPS and radio-controlled watch is considered as a display window for atomic clocks like the NIST F1 clock. The appeal of a HAQ watch is, unarguably, the fact that they produce reliable precision intrinsically, rather than display regulated accuracy from an external source.

That said, the watch industry is a constant race to get to the top and stay at the top, both for quartz and automatic watch manufacturers. Pioneers in quartz technology are constantly striving to be the best of their kind. Mechanical watches are working towards delivering a standard of accuracy that comes close to what a quartz movement delivers. If you want an accurate timekeeping instrument that deviates a few seconds per year, it’s a quartz watch you need. If it’s meticulous craftsmanship and horological complexity you love, then it’s a mechanical watch for you.

Pros of the Citizen Chronomaster

Citizen has created something wholly unique with the B900-61E model. It belongs to “The Citizen” line (also known as the Chronomaster collection), which represents some of the most autonomous timekeeping technology ever created. The fact that Citizen remains at the forefront in this field goes to show just how niche an area the brand is becoming an expert in.

HAQ watches are appreciated by an exclusive club of watch fanatics, to say the least. The watch, in terms of fit and finish, can be likened to Grand Seiko’s level. What makes the timepiece so special, however, is how it marries a traditional look and feel with modern technological know-how so effortlessly.

The number #1 selling point of the Citizen Chronomaster is its highly precise quartz movement, which promises an accuracy of within 5 seconds per year. Compared to a standard quartz movement, the Chronomaster is 15 times more accurate. If we now compare that with a mechanical movement, which, on average, guarantees the accuracy of around 6 seconds per day, it’s easy to appreciate Citizen’s unique advantage over a large proportion of the watch industry.

Citizen Chronomaster watches are also praised for their beautifully crafted bracelets. Some of the models from this collection feature ion-plated titanium bracelets. This variation offers a lightweight feel upon the wrist, yet shares the same rugged and robust appearance as stainless steel. Many love the understated appeal of a Citizen Chronomaster watch. You can’t beat a solid, reliable timepiece, (unless a mechanical movement is the only thing that really does it for you in a watch).

The brand manages to communicate a strong sense of quality and refinement through this design while avoiding the “geek look” that so many quartz watches exude. Instead, the simplified layout of this Chronomaster’s dial promotes beautiful balance, with all elements executed in perfect proportion.

The face of the watch is where Citizen’s craftsmanship can really shine. The display is understated enough to pair just as well with a professional suit as it would with relaxed attire at the weekend. If you’re looking for a watch that’s versatile enough to sport on the wrist every day of the week, this watch certainly belongs on your arm. Citizen’s highly-skilled craftsmen have put considerable thought and care into the design of this dial – namely how the white “Chronomaster” lettering in a stylized font at 6 o’clock contrasts superbly with the polished surfaces of the other appliques on the dial.

The finishes on the dial elements are incredibly well executed. The second hand has a smoothly rounded base that replicates the curvature of the watch’s 38mm steel bezel. The width of the stainless steel case is a comfortable and unobtrusive size for those gentlemen with a slender-shaped wrist. In fact, this Chronomaster makes for a refreshing change in terms of its size, since smaller watches are frequently becoming replaced by oversized watches. The hour and minute hands have a sharp beveled finish, giving the timepiece an overall sharp and crisp look. It’s perfect for wearing with an office wardrobe.

The Chronomaster is definitely in line with the rest of Citizen’s catalog. The brand constantly pushes itself to go above and beyond when it comes to creating a watch that feels long-lasting and robust. Taken from a blend of high-grade materials, this model certainly delivers on values of longevity and endurance.

The design of this Chronomaster illustrates how a HAQ watch can be just as technically intriguing as a solar-powered watch, and despite the huge choice in solar-powered watches out there right now, there’s something so modest and professional-looking about this model.

The watch boasts another innovative feature too. It allows you to adjust the hour hand effortlessly without having to stop the watch from running. It’s a great tool if you frequently travel abroad, as it allows you to adjust to a different time zone and still observe the watch’s incredible accuracy while on the move. Last of all, with a battery of five years, you won’t need to worry about servicing your watch any more frequently than you would do a mechanical watch.

Let’s quickly recap on the main features of the Citizen Chronomaster B900-61E:

+ A simple, no-fuss dial design
+ Black dial with sword-shaped hour and minute hands
+ Date window at 3 o’clock
+ Case crafted from brushed and polished stainless steel
+ Matching steel bracelet with folding clasp
+ Powered by the caliber A660 quartz movement
+ Non-solar-powered variation
+ 38mm case diameter
+ An accuracy of ±5 seconds per year
+ Suitable for wearing with professional attire
+ Adjust the hour hand back or forth without stopping the watch
+ Perfect for adjusting the time if you’re a frequent traveler

Who will the Citizen Chronomaster B900-61E appeal to?

If you’re in the market for a high accuracy quartz watches above anything else, this Citizen watch will certainly float your boat. It relies on its own accuracy rather than acting as a portal to display atomic timekeeping. It’s not so technical either, so if you’re keen not to overload your wrist with a load of functions that you don’t know how to utilize, you can instead make use out of the classic three-handed dial design and its useful date feature at 3.

If you spend a lot of time in the office or if your job requires you to look smart and professional all week through, you can don this watch to the wrist in a flash. Rest assured, you’ll certainly look smart without having to put any effort into your outfit. First and foremost, though, the Citizen Chronomaster is a watch for any man who doesn’t want to compromise on accuracy.

If you don’t have your heart set on a mechanical wristwatch, this model will exceed a mechanical watch’s precision any day. It will also appeal to those who don’t want the added responsibility of having to service their watch every couple of years. The battery of this Chronometer won’t need replacing for at least five years. Lastly, if you travel often, you can adjust the hour to sync with a local time zone without having to stop the watch from operating.

On the whole, the Citizen Chronomaster B900-61E is a classic-looking do-anything, go-anywhere watch built from industry-leading, high-grade materials, and the brand’s cutting edge quartz technology. 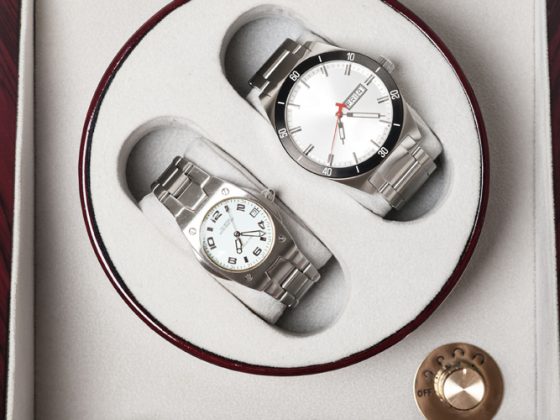 A Basic Guide to Watch Winders